skip to main | skip to sidebar

Robin was planning to join the boys for a 1000km brevet in the Blue Mountains of Oregon leaving me unsupervised and gazing in wonderment at the weekend forecast. Mitchel suggested the Flying Wheels Summer Century which I hadn't done in dogs' years but he invited Jason too so it was tempting. Then Jason's anti-social side emerged saying he hated crowds and waiting in line at sani-huts so how about doing the Mountain Loop Highway 200km permanent? FISH ON! I had been wanting to do this route and the prospect of getting to ride with Jason made it a "must do". At the risk of jinxing myself I'll also say that I needed to do a 200km this month to make it 10 out of 12 for my R-12 endeavor.

After what seemed like decades of grey, wet, and cold weather Saturday emerged like a sparkling jewel. Clear blue skies, singing birds, children frolicking, and BBQ's smoking. I picked Jason up in Redmond (I offered to drive in order to ensure he wouldn't desert me!) and we headed to Snohomish. I stuffed a Snickers Dark in my mouth just before Jason took our "start" picture outside the 7-11.

We started about 20 minutes late but neither of us seemed to feel any pressure. Unlike recent rides where I wanted to get done before it got TOO dark, TOO wet, and TOO cold today promised endless warmth and sunshine.

Given the 14 miles of unpaved road on this route Robin had fitted my Rambouillet with no fenders and extra fat and cushy tires. Being extra fat and cushy they felt pretty sluggish on the pavement - or maybe that was the engine's fault - and Jason gave me a hard time for stopping to check first if a brake was dragging and second if my tire was going flat. We did discover that the rear tire was mounted with the tread in the wrong direction so I had my excuse for riding so slowly! I could complain about shoddy work to my mechanic but I can already anticipate the reply. Something along the lines of "you can mount your own *&^%&^% tire from now on" so I think I'll keep my mouth shut on that one.

First control in Arlington and we got water to top off our bottles. Jason found one of the two zip ties attaching his light to his helmet had broken and the second was looking iffy. He didn't have cutters so he removed the light and then just tightened the remaining zip tie into a stylish "horn" and dubbed himself rhinocesquatch (a version of sasquatch which is his usual self-imposed moniker)

Most of the route from Arlington to Darrington is along Hwy 530 which is fine for about 15-20 miles and then you are really ready to be done with it but you still have about 7+ miles to go. Jason employed his time along the route taking pictures and waiting for me.

We had our first lunch stop in Darrington. Most of the times I have visited this little town it has been cold so it was a real treat to sit at the little picnic table in the sun munching a sandwich and chips and reapplying sunscreen. We had about 2 hours in the bank even with our late start but we had the big, unpaved climb ahead of us so off we went. Just a few miles later we are greeted by the "pavement ends" sign which, in this case, translates "and the fun begins"! I was so impressed with this road. It was packed solid and smoother than 95% of the roads in Skagit County. There were a few potholes but easy to navigate and the vehicle traffic was low and slow. Most of the road followed the Sauk River through the Mt Baker National Forest so we had the beautiful rushing river and breathtaking mountain views complete with snow topped peaks and gorgeous waterfalls.

This was the place to be on this gorgeous day:

The climb did get steeper towards the top but there were only 2 or 3 sections where I had to hit the granny gear and plenty of thigh relieving flat and even short downhills spots along the way.

After we reached the summit the pavement picked up again and we dove down the mountain triumphantly. We stopped at a picnic site for second lunch and some intense sandwich trading negotiations. A lovely lady with a foreign accent told us what great cyclists we were and our heads swelled so much we had a hard time getting our helmets back on.

We did have some headwind on the way to Granite Falls but I had wisely brought along my own personal windscreen. I only had to relieve his efforts for short periods to keep him going! Somewhere around Verlot we saw a guy riding a penny farthing bicycle in the opposite direction - too cool!

In Granite Falls I luxuriated outside a mini-mart by sitting on the sidewalk while munching a giant ice cream cookie sandwich. There are times when Granite Falls, a piece of concrete, and a fat-loaded dairy product are my idea of heaven and this was one of them. My big revelation here was that for the first time in a very long time I was saying to myself "we only have 21 miles left to enjoy" rather than "I only have to survive another 21 miles". It was a nice feeling which lasted for about 10 minutes after we left Granite Falls and started hitting the hills. Dubuque Rd was engineered by evil men with the sole intention of reducing randonneurs to tears. They didn't get the best of me this time however so they quickly regrouped and threw 131st Ave SE at me. Still no tears but Jason noted that I had to use my 24 inch gear for the upper half of the climb. After that we were home free cruising into Snohomish where we were greeted by cheering throngs cleverly disguised as mildly impressed mini-mart cashiers. As I've said before, I only do it for the fame and the glamour. 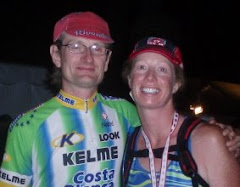